Athenia was built by Fairfield Shipbuilding and Engineering, Glasgow, and was launched in January 1922. She made her maiden voyage for an Anchor-Donaldson/Cunard joint service on 21 April 1923, from Glasgow and Liverpool to Montrťal. (Cunard owned Anchor, which in turn partially owned Anchor-Donaldson, and at times Cunard's Liverpool-Canada service was maintained by Athenia and her fleetmates.)

In May 1935, the Anchor Line went into liquidation, Anchor-Donaldson ceased to exist and the Cunard relationship ended. The Donaldson Line acquired Anchor's interest in Anchor-Donaldson, including Athenia, and changed its name to Donaldson Atlantic Line. The change in ownership had no effect on Athenia; she remained on the same Glasgow-Liverpool-Canada service as she had maintained for Anchor-Donaldson.

On 3 September 1939, while en route to Montrťal, Athenic became the first merchant marine casualty of World War II, when she was torpedoed and sunk by U30, some 200 miles west of the Hebrides. Unable to summon assistance when her radio room was damaged by shelling from the U-boat after it surfaced, Athenic developed a severe list which impeded the launching of all of her lifeboats. There were 112 fatalities out of the 1,418 on board, most occurring when three lifeboats were lost. 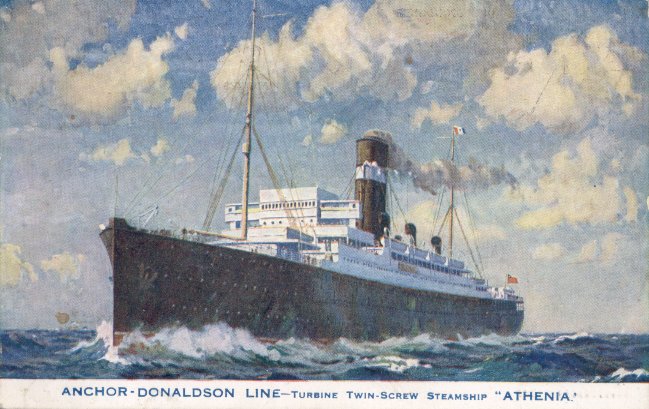