Calgarian, sister ship of Alsatian, was the last ship built for the Allan Line. A product of Fairfield Ship Building and Engineering of Glasgow, she was launched in April 1913, and made her maiden voyage from Liverpool to Canada on 8 May 1914. (The sources cited below give differing information as to the Canadian end of Calgarian's maiden voyage: Haws says it was Montrťal, with a call at Quťbec; Bonsor says Quťbec; Kludas says St. John; and Williams says St. John's, with a call at Halifax.)

Calgarian's commercial career lasted only four months. World War I began in August 1914 and on 15 September Calgarian was taken over as an armed merchant cruiser. She served as an AMC for the rest of her life, although on some occasions she transported troops and passengers across the Atlantic.

Officially transferred to Canadian Pacific on in July 1917, when Canadian Pacific completed its acquisition of Allan, Calgarian never sailed commercially for her new owner. She was torpedoed and sunk off Rathlin Island by U-19 on 1 March 1918, with 49 deaths. 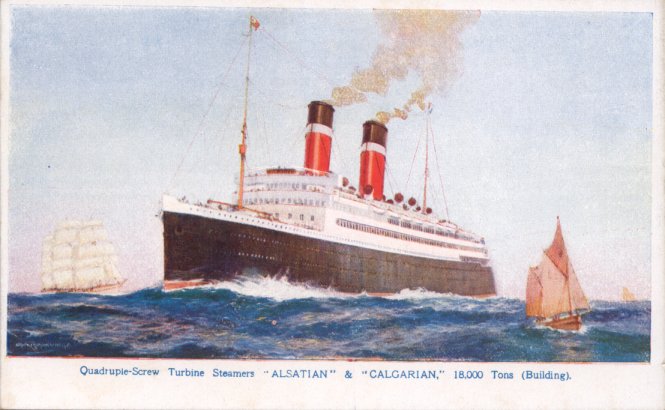