Built by Caird & Co. of Greenock, City of Berlin was launched in October 1874 and made her maiden voyage for the Inman Line, from Liverpool to New York, on 29 April 1875.

Within six months City of Berlin captured both Blue Ribands in a single roundtrip and established herself, at least for a while, as the fastest ship on the North Atlantic. In September she set a westbound record of 7 days, 18 hours, 2 minutes (15.21 knots) from Queenstown to Sandy Hook, the first ship to make a westbound trip at a speed in excess of 15 knots, and on her return trip she set an eastbound record of 7 days, 15 hours, 28 minutes (15.37 knots). She held both records for five months, but lost the eastbound record to White Star's Germanic in February 1876, and the westbound one to Germanic's sister, Britannic I, the following November.

In 1879, City of Berlin became the North Atlantic steamer to be fitted with electric lighting, four large fixtures being installed in the cabin saloon and two in steerage, and during a major refitting in 1887, electric lighting was installed throughout the ship. At the same time, her original compound engine was replaced by a triple expansion engine by Laird Bros.of Birkenhead.

Meanwhile, in 1886, Inman had been acquired by the International Navigation Co., a Pennsylvania corporation that operated the American and Red Star Lines. For a period of time, the line was known as Inman & International, but in 1892, I & I was awarded a United States Mail contract and was permitted to transfer the former Inman liners City of New York and City of Paris to American registry even though they were built abroad, in exchange for a commitment to build two new express steamers in the United States. The company's U.S.-flagged ships were transferred to a newly-formed New Jersey corporation called International Navigation Co., while its other ships were transferred to a newly-created British corporation, also called International Navigation Co. City of Berlin, renamed Berlin, was transferred to the British company, the line's name was changed from I & I back to the American Line and Inman's Liverpool base was dropped in favor of American's Southampton terminus. With these changes, the Inman name and its distinctive "City of" ship names disappeared from the North Atlantic.

Berlin served on American's Southampton-New York service from March 1893 to August 1895. She was then placed on Red Star's Antwerp-New York service, and except for occasional service as a substitute on the Southampton service, stayed on that route until the spring of 1898, when she returned to Southampton for two roundtrips to New York.

Later that year, Berlin became the U.S. troop transport ship Meade and was used to transport troops to the Philippines during the Spanish-American War On 31 January 1906, she was burned out while at San Francisco; three were killed and several others were reported missing. In 1918, Meade became a United States Shipping Board training ship at Boston. She was scrapped at Philadelphia in 1921. 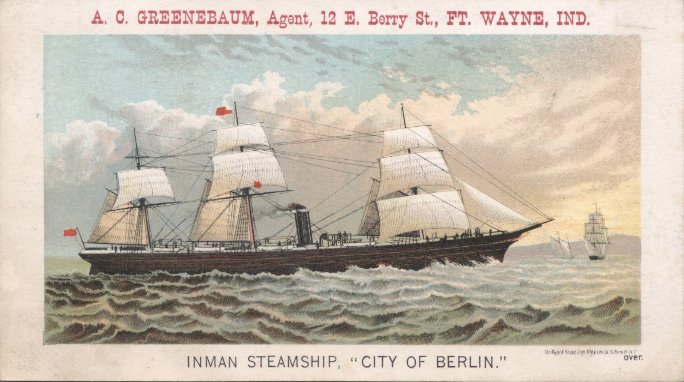 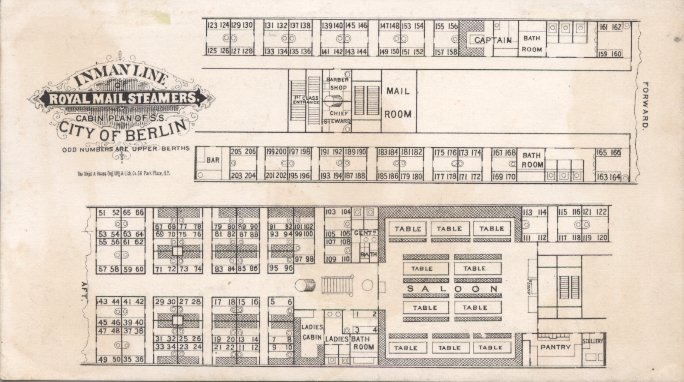