Corsican was built for the Allan Line by Barclay, Curle & Co., of Glasgow, and was launched in April 1907. Her maiden voyage, on 31 October of the same year, was from Liverpool to St. John, New Brunswick, a route she would remain on until early 1914. (During that period, four of her trips were on charter to Canadian Pacific.)

On 12 August 1912, Corsican collided with an iceberg near Belle Isle, but escaped with only minor damage.

From April 1914, Corsican made four Glasgow-Montrťal roundtrips before being taken over as a troopship in August. During her trooping duties she became Canadian Pacific property when the acquisition of the Allan Line was completed on 16 July 1917. She re-entered commercial service with an August 1918 sailing from London to Montrťal and then returned to Liverpool-St. John service in January 1919.

Over the next three years, Corsican served Canada from London, Glasgow, Liverpool and Antwerp. A major refitting in 1922 left her with a new passenger accommodation configuration (cabin/third) and a new name (Margrave). Margrave's final voyage, from Glasgow to Montrťal by way of Belfast and Quťbec began on 26 April 1923. On 21 May, on the return leg of that trip, she was wrecked on Freel Rock, 20 miles (32 km) west of Cape Race. Although no lives were lost, the ship was a total loss. 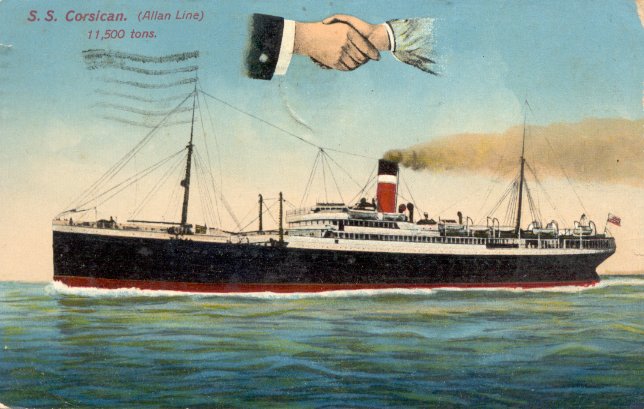