Empress of India (I)

In 1889, the Canadian Pacific Railway signed a ten year transpacific mail contract with the British government. That contract called for Canadian Pacific to deliver mail from Halifax to Vancouver by rail, and then to Japan and China by ship, reaching Hong Kong in 684 hours from April to November and 732 hours the rest of the year. In exchange, Canadian Pacific would receive a Ł60,000 per year subsidy, Ł15,000 of that amount to be paid by the Canadian government. In addition, the Admiralty was granted the right to hire the ships employed on the route at any time and to have troops carried at cost. Fulfillment of the contract required three ships, built to the Admiralty's specifications for armed merchant cruisers, capable of 16 knots for regular service, and 17.5 knots in emergencies. Canadian Pacific ordered three ships -- Empress of India (I), Empress of Japan (I) and Empress of China (I) -- to meet the mail contract requirements. All three were built by Naval Construction & Armament Co. of Barrow.

The first of the three, Empress of India, was launched in August 1890, and made her maiden voyage from Liverpool to Vancouver (via the Suez Canal and Hong Kong) on 8 February 1891, arriving in British Columbia on 28 April. In May she began her regular transpacific service from Vancouver to Hong Kong, with calls at Yokohama, Kobe, Nagasaki and Shanghai.

A new mail contract in 1908 required that the Vancouver-Yokohama portion of the trip be completed in 10 1/2 days. To accommodate this requirement, some second class berths were converted into extra coal bunkers, and the ship's funnels were heightened to provide better draft to the furnaces.

Empress of India remained in Canadian Pacific service until 1914, when she was sold to the Maharajah of Gwalior, who converted her, at his own expense, into an Indian Army hospital ship. She was commissioned, and given the name Loyalty in January 1915.

At the war's end, Loyalty was sold to the Scindia Steam Navigation Co. and instituted that line's Bombay-Marseilles service in March 1919. She made her final trip on that route in October 1920 and was then laid up at Bombay. She was broken up, also at Bombay, in 1923. 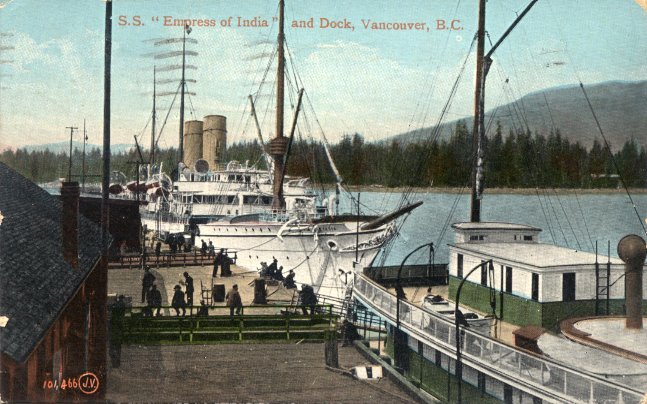