The wreck of Hilda, as reported in The New York Times:

OVER 100 PERISH OFF FRENCH COAST
---
Passenger Steamer in a Snowşstorm Dashes on Rocks
---
SIX RESCUED FROM THE RIGGING
---
May Be Only Survivors of the Hilda ---British Officers and Society
People Among the Victims
---
LONDON, Nov. 19---Probably more than 100 lives were lost this morning by
the sinking of the Southwestern Railway's cross-channel steamer Hilda.

The Hilda left Southampton Friday night for St Malo on the Brittany
Coast with considerably over a hundred souls on board, the majority of
whom were drowned. The steamer's passage was greatly delayed by a fog in
the Channel and when nearing St. Malo she ran into a severe snowstorm,
apparently missed her course, and foundered on the rocks off Jardin
Lighthouse, three miles from St. Malo.

The company's steamer Ada, outward from St. Malo, rescued five of the
passengers and one of the crew. These are now on their way to
Southampton, and it is believed are the only survivors, though an
unconfirmed report reached Paris that seventy had been saved.

The crew numbered twenty-six, and there were about a hundred passengers,
the majority being onion dealers from St. Brieuc and neighborhood.

A telegram from St. Servan, adjoining the town of St. Malo, gives the
few parşticulars yet available. The Hilda was near St. Malo Saturday
morning. She struck the rocks at 4 o'clock Sunday morning in the
roadstead off the Island of Cezambre. She had missed the tide owing to
bad weather and fog.

The majority of the crew and passenşgers were asleep at the time. Two
boats were lowered, one of which, containing five men, arrived at St.
Servan. The second boat was picked up empty at St. Cast, where thirteen
bodies were washed ashore.

The top of the Hilda's funnel and her mast are visible at low tide.

The Hilda was built at Glasgow in 1882, and registered 848 tons. She
was a screw steamer of iron construction, and was 235 feet in length.

The Southwestern Railway Company is as yet unable to give a list of the
Hilda's passengers, but they say that a score booked passage at stations
between Lonşdon and Southampton, and that to the best of their knowledge
ninety-nine were drowned and only six saved.

The company is still without reliable details as to how the disaster
happened. Its agent at St. Malo only briefly reported: "The Ada has put
back, and reports the Hilda is a total wreck at Les Portes reef, outside
Jardin Lighthouse. The Ada's boat saved five onion men and a seaman
named Grinter out of the rigşging. They appear to be the only
surşvivors."
-----
ST. MALO, France, Nov. 19---The exact number of lives lost on the Hilda
is unknown here. It is understood that there were about twenty
first-class passengers, including several English people.

Among the latter were the Hon. Mrs. Butler, sister-in-law of Lord
Lanesborough, and Col. Follet. Though it is not certain that these were
actually on board, they were expected to travel by the Hilda, and it is
known that all the first-class passengers were drowned. These passengers
were English officers and others who were coming to rejoin their
families or to spend the season at St. Malo and Dinard, (opposite St.
Malo.)

It appears to be certain that only six were saved, these being five
onion sellers and an English seaman named Grinter, belonging to
Guernsey; and that the total on board, including the crew, numbered 105.

The delay in the arrival of the Hilda at first inspired little anxiety,
as there was dreadful weather in the Channel, and every one had full
confidence in her Captain, Gregory, an experienced man who was likely to
exercise caution in approaching the dangerous coast of Brittany, which
he had known for thirty years.

The disaster was first suspected through the washing ashore of a body,
and the port authorities immediately sent out a tug. It was then learned
that the Hilda was wrecked on a treacherous reef close to the island of
Cezambre called "Les Portes." She had apparently struck, broken her
back, and immediately sank, leaving no time to launch the boats. The
Jardin light is close to the spot.

It cannot yet be explained at what time or how the disaster occurred.
The entrance to St. Malo is dangerous, the currents and rocks needing
the exercise of considerable caution at all times. but more especially
in bad weather.

Many bodies have been washed ashore at different points, some wearing
life belts. Six of the survivors, according to a report in circulation
here, were rescued by the Ada from the rigging.

On March 30, 1899, the Southwestern Railway excursion steamer Stella,
while bound for Guernsey, Jersey, and St. Malo, with 140 passengers and
a crew of 40 dashed at full speed onto Black Rock near the Casquets,
eight miles from Guernsey and sank in eight minutes. Capt. Reeks and 104
sailors and passengers went calmly down to their doom.

In February of the previous year the steamer Channel Queen, bound to the
islands and St. Malo from Plymouth, dashed into the same dangerous rock
and twelve passengers and a number of the crew were lost with her.

On Dec. 4, 1900, the steamer Rossgell was wrecked off Jersey, and the
captain and nine members of the crew went down.

128 Lost with the Hilda
---
LONDON, Nov. 20---One hundred and twenty-eight persons lost their lives
in the wreck of the London and Southwestşern Railroad Company's steamer
Hilda off St. Malo on Saturday night, according to an official estimate
given out toş-night by the officers of the company. This death roll
includes twenty-one saşloon passengers, eighty French onion sellers, and
twenty-seven of the crew.

HILDA SURVIVOR'S STORY
---
Vessel Was Going Dead Slow-Boilers Did Not Burst
---
ST. MALO, Nov. 21---James Grinter, the only survivor of the crew of the
British Channel steamer Hilda, wrecked off this port on Saturday night,
with the loss of 123 lives, was interviewed to-day and settled disputed
points in connection with the disaster. Grinter said:

"There is no truth in the report that the Hilda's boilers burst. There
was a terrific shock as the steamer struck the rocks, and this made a
noise resembling an explosion. But I am an engine room mechanic, and as
such I am positive that the boilers are intact.

"The Hilda was pinned on a huge rock, and the waves, sweeping fiercely
over her, carried away the women and children.

"With thirty other persons, by actual count, I climbed up into the
rigging, and I managed to hold on until rescued. But the others
gradually fell off before the fearful storm of hail and sleet, until
only six of us remained, when we were sighted by the steamer Ada, which
rescued us when we were nearly dead as the result of cold and exposure.

"The report that the Hilda struck on Sunday morning is also wrong. She
went on the rocks at 10 o'clock on Saturday night, while going dead slow
and trying to make the entrance of St. Malo harbor." 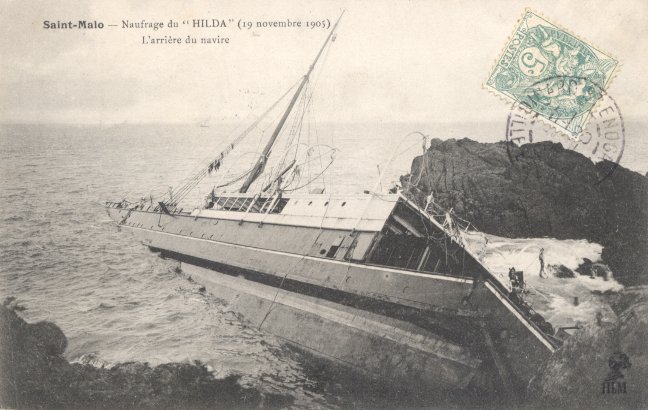