The third of the three-ship Athenic class, Ionic was built by Harland & Wolff of Belfast. Launched in May 1902, she took her maiden voyage, from London to Wellington, on the Shaw, Savill & Albion joint service on 16 January 1903. In 1909, Ionic became the first steamer in the New Zealand trade to be fitted with wireless apparatus.

She remained in that service until White Star went out of existence in May 1934. During the first World War, however, she was taken over by the Government, and used as a troop ship for the New Zealand Expeditionary Force in 1914. Then from 1917 until 1919, she was operated by the Shipping Controller under the Liner Requisition scheme.

When Cunard White Star was formed, Ionic was transferred to Shaw, Savill & Albion, and remained in that line's service to New Zealand. She made her final voyage in September 1936, returning to London for the last time in December. She was broken up in Japan the following year.

One of the cards on this page shows Ionic in the Panama canal. Up until World War I, the White Star/Shaw Savill service to New Zealand was via Cape Town outbound, and around Cape Horn inbound. After the War, however, the service was rerouted through the Canal. 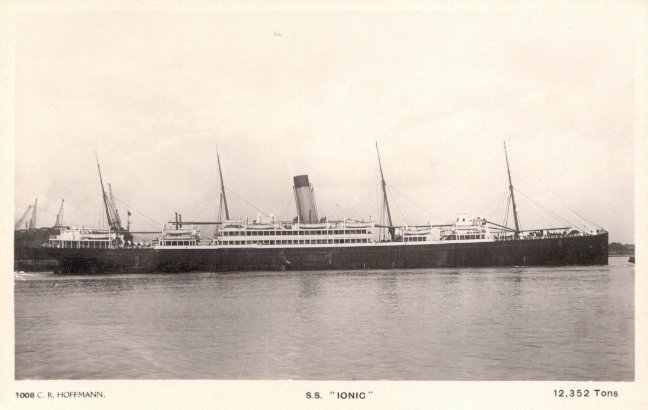 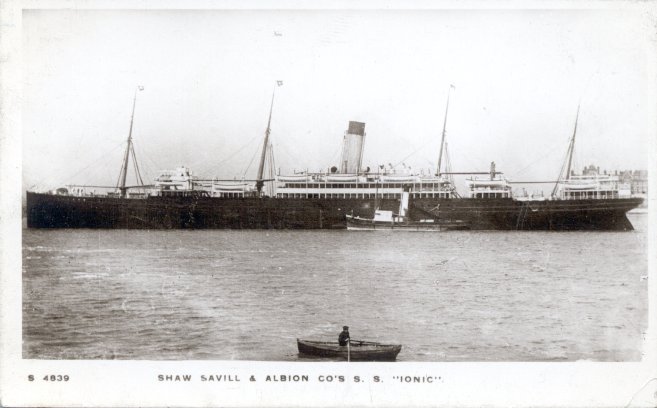