Montcalm, sister of Montrose II and Montclare, was built by John Brown & Co, Glasgow and was launched in 1920. She made her Liverpool-Halifax-St. John maiden voyage on 17 January 1922. On the return leg, she rescued 23 members of the crew of the Norwegian steamer Mod.

In 1928, she was sent to Harland & Wolff, Belfast, for the installation of new single reduction turbines. When she returned to service in March 1929, she was placed on the Southampton-Canada route. She also made some Antwerp-Canada, Hamburg-Canada and Liverpool-Canada sailings over the next few years. In 1930, Montcalm made one of only two calls Canadian Pacific ever made at Reykjavik, Iceland.

By 1932, Montcalm was used principally for cruising out of Liverpool, but continued to make occasional Atlantic crossings out of Antwerp, Southampton and Liverpool. Her last crossing, from Liverpool, was in April 1939. When World War II began in September, the ship was taken over and renamed RMS Wolfe. Wolfe served successively as an armed merchant cruiser (1939), a troop transport (1941), a submarine depot ship (1942) and a destroyer depot ship (1943). Purchased by the Admiralty in 1942, she never returned to Canadian Pacific, but was laid up in 1950 and sold for breaking up in 1952.

Haws states that the renaming of Montcalm was necessary to avoid confusion with a French cruiser of that name. The selection of Wolfe as the new name, though, appears to have been quite deliberate. Major General James Wolfe and the Marquis de Montcalm were the opposing commanders in the Battle of Québec (13 September 1759), during which they both were killed. Québec was the decisive battle of the French and Indian War, which solidified British control of Canada and the end of French rule there. 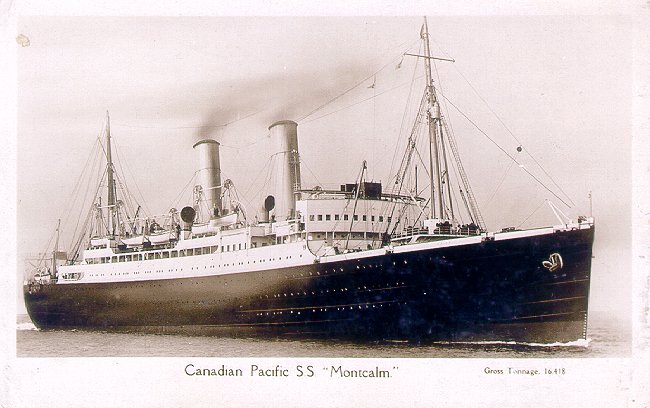