The last ship to be built for the Union Steam Ship Company, Saxon was a product of Harland & Wolff, Belfast. She was launched in December 1899, but was transferred to the newly-created Union-Castle Line before she was completed. Saxon became the first ship to begin her career with Union-Castle, making her maiden voyage on the line's mail service from Southampton to Cape Town on 16 June 1900. On that voyage, Saxon was painted in Union livery, but sported Union-Castle funnels. At her first repainting, however, she was given Union-Castle's distinctive lavender hull.

During World War I Saxon remained on commercial service, although her third-class was devoted to troop-carrying on occasion. (Since Southampton had become a military port when the war began, Saxon's British terminus was moved to London.) From 1917 on, she was used full-time for trooping, primarily in the Mediterranean, and after the Armistice she repatriated Australian troops before being refitted for passenger service again.

Saxon resumed her Union-Castle service in 1919, and remained on the mail service through 1930. She made her final sailing on the intermediate service in January 1931 and was then laid up as a "reserve" ship. She was scrapped at Blyth in 1935, the last survivor of the Union Line fleet. 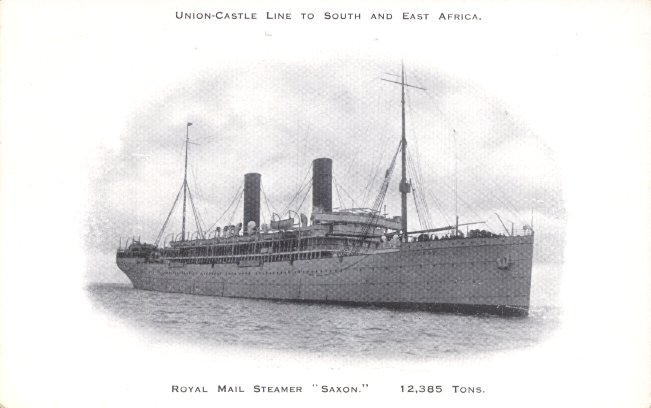